We may not be able to go on holiday to Sweden this summer, but that doesn't mean we can’t put the country in the spotlight. In the winter edition 2019 of Imagicasa magazine we published an extensive article about some of Sweden's top designers from the 20th century. Now, for three weeks in a row, we will share these designs on our website as well because even today they are still very inspiring (part 2/3).

Vintage was once just seen as modern design and was first introduced to the world by these names in the 30s, 40s and 50s. Whether it’s a genuine vintage piece, a reproduction of an iconic design or 21st-century furniture with an obvious wink to the past, you can’t see past them. Maybe you even own such a beautiful chair, table or sofa but just don’t know the history of it. That is why Imagicasa is happy to present to you a few 20th-century designers who have quite the significant influence on the interiors of today. 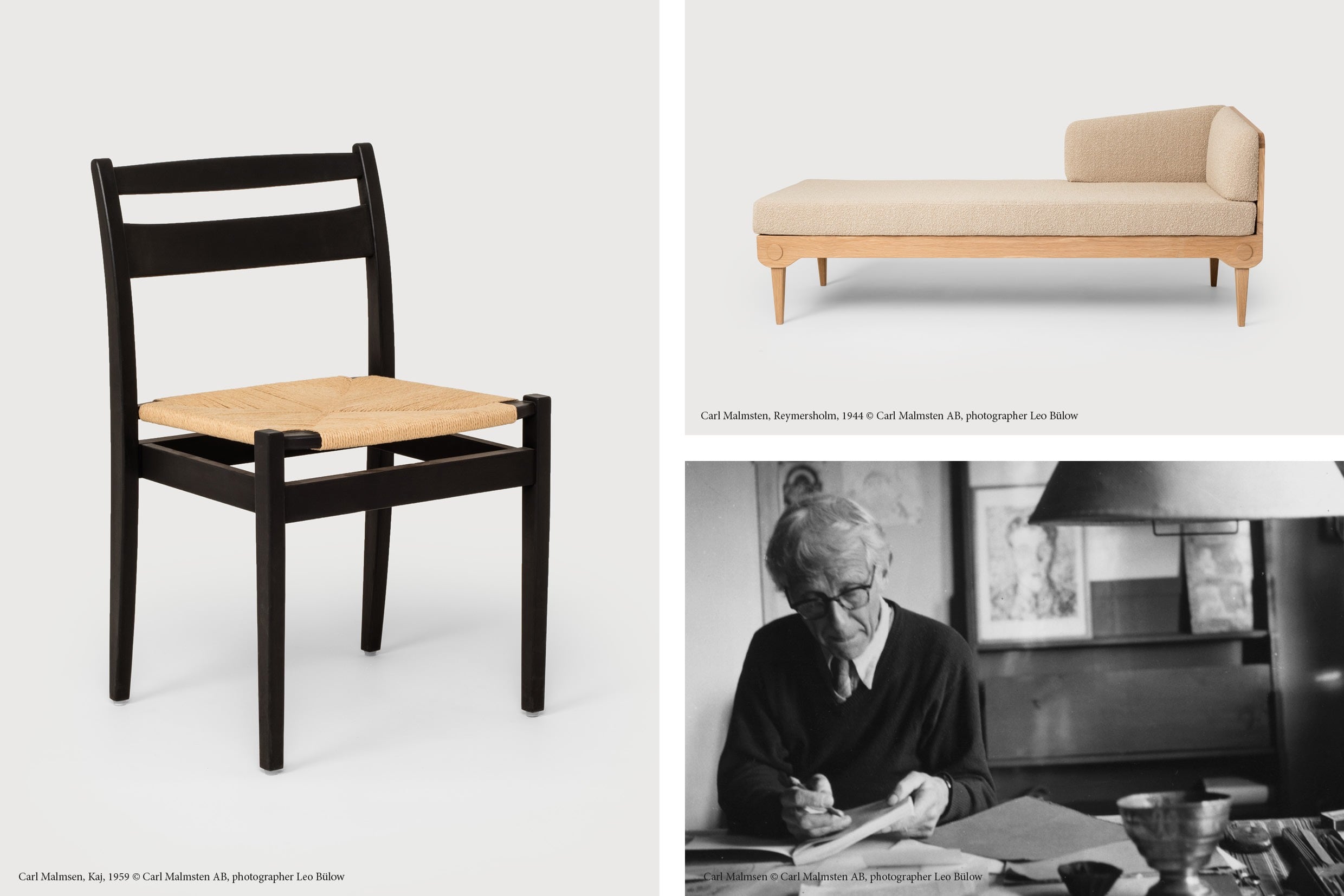 A second instalment on 20th century designers who have an influence on design to this day.

Carl Malmsten (1888-1972)
Many different sources describe Carl Malmsten as being 'eccentric' and 'stubborn'. He was, without a doubt, a man with an outspoken opinion and a lot of ambition, which ultimately resulted in a successful and unique career as a designer, but also as a teacher. After his studies at the University of Stockholm and his first work experience as a carpenter, he also worked at various architectural firms for several years. In 1916, when he was only 28 years old, he founded his own studio and won an important competition to design the furniture for Stockholm's new town hall. The 1920s and 1930s were busy times for Carl Malmsten, who became a true celebrity designer working for high-profile clients, including the then Crown Prince of Sweden Gustav Adolf and his wife. He was also commissioned to design the furnishings and furniture for the Stockholm Concert Hall, the famous 'Matchstick Palace' – an office building designed by architect Ivar Kreuger –, the Swedish Institute in Rome, the League of Nations in Geneva and even the Waldorf Astoria Hotel in New York. If you wanted a luxurious interior, Malmsten was the man for the job. A fun fact is that he often named his creations after the client, the place where the furniture would end up or the place that inspired him for the design. Some examples are the 'Lilla Åland' chair (that was inspired by chairs he came across on a visit to the Åland Islands between Sweden and Finland) , the 'Reymersholm' sofa (supposedly designed for a client living on the Stockholm island of Reimersholme) and the 'Widemar' chair (dedicated to the Swedish lawyer and politician Ingrid Gärde Widemar). 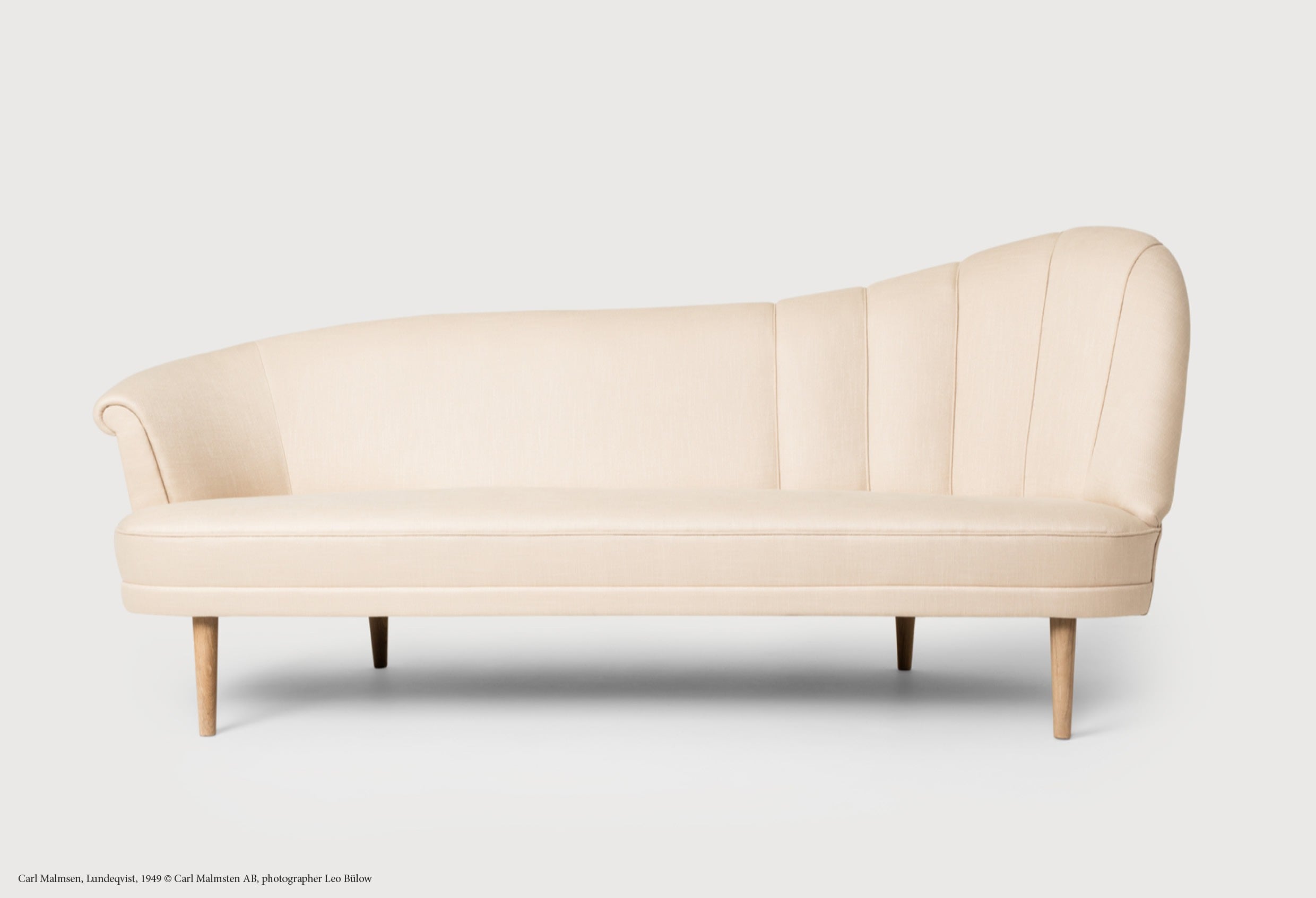 Malmsten's success is mainly due to his exceptional vision on interior design and on how to create furniture. He was a critic of the Functionalist style that many of his contemporaries were striving for and he was a strong advocate of traditional craftsmanship. According to him, furniture should also foster the user's well-being and make them feel comfortable and truly at home. Malmsten worked very methodically to determine the right proportions and details in a design. He also found a lot of inspiration in nature, where there are hardly any sharp edges or corners. According to him, smooth lines and soft edges were more pleasing to the eye and more comfortable to touch, hence better to relax in.

He often named his creations after the client, the place where it would end up or that inspired him for the design.

Convinced of his way of designing and wishing to give future generations the chance to develop creatively, Carl Malmsten founded several workshops and even two schools during his lifetime: the Carl Mamsten Verkstadsskola in Stockholm (1930, since 2000 part of the University of Linköping) and Capellagården (1957) on the island of Öland in the southeast of Sweden. Designer Ingegerd Råman (°1943), who is mainly known for her glasswork and ceramics, once told the following about her former mentor: "He knew what he stood for and it was wonderful to meet such a person. I learned about simplicity and tradition, the quality of materials and that things must function." 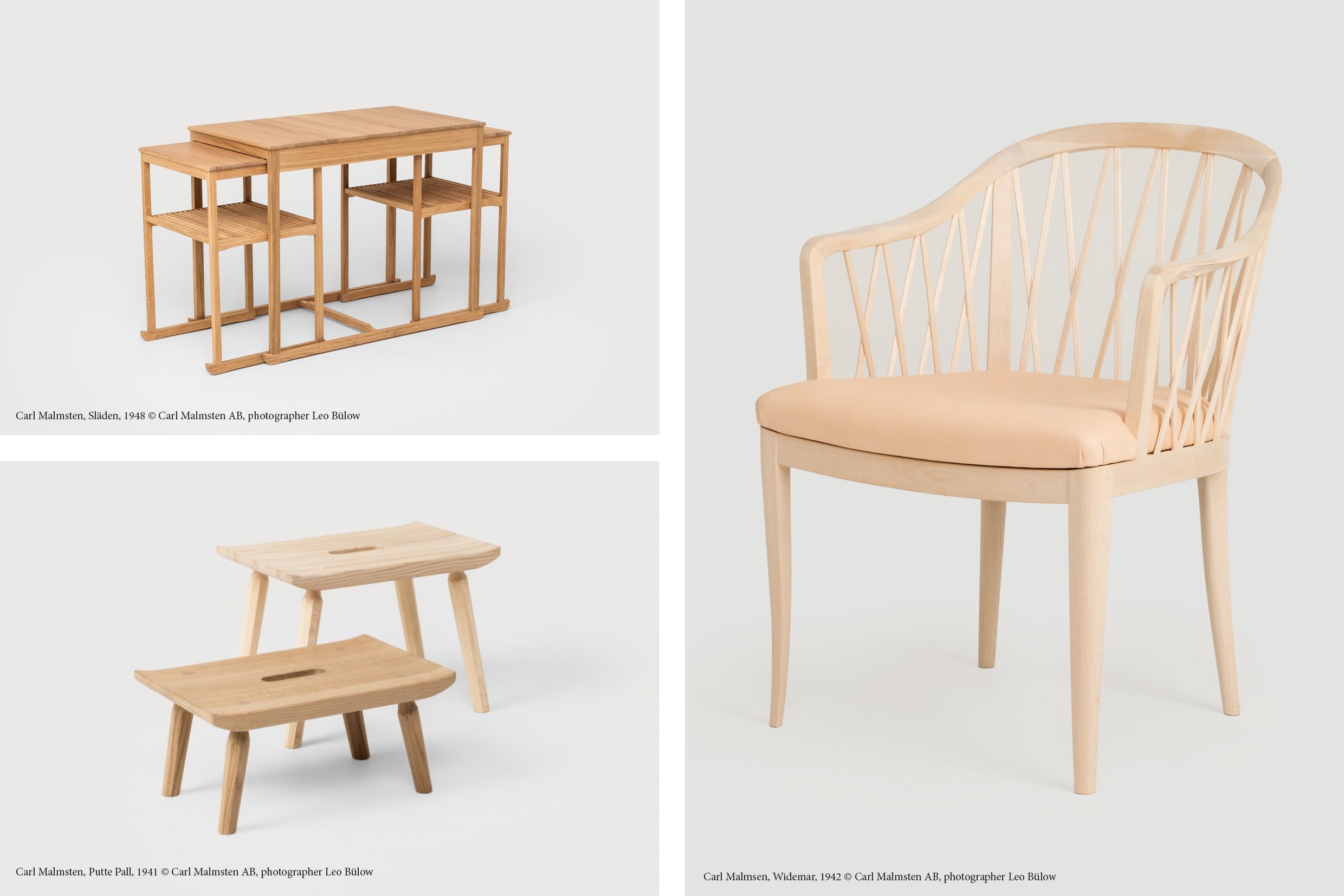 Greta M. Grossman (1906-1999)
The Swedish designer was born into a family of cabinetmakers. Although as a woman it was not an obvious choice in the first half of the 20th century, it is not surprising that she studied furniture design in Stockholm and later also architecture.

As the only woman on our list, Greta Magnusson Grossman knows how to stand her ground with her designs. The best-known designs from her forty-year-long career are probably the 'Gräshoppa' and 'Cobra' lamps. The latter even gained her the 'Good Design Award' presented by the Modern Museum of Art (MoMA) in New York in 1950. 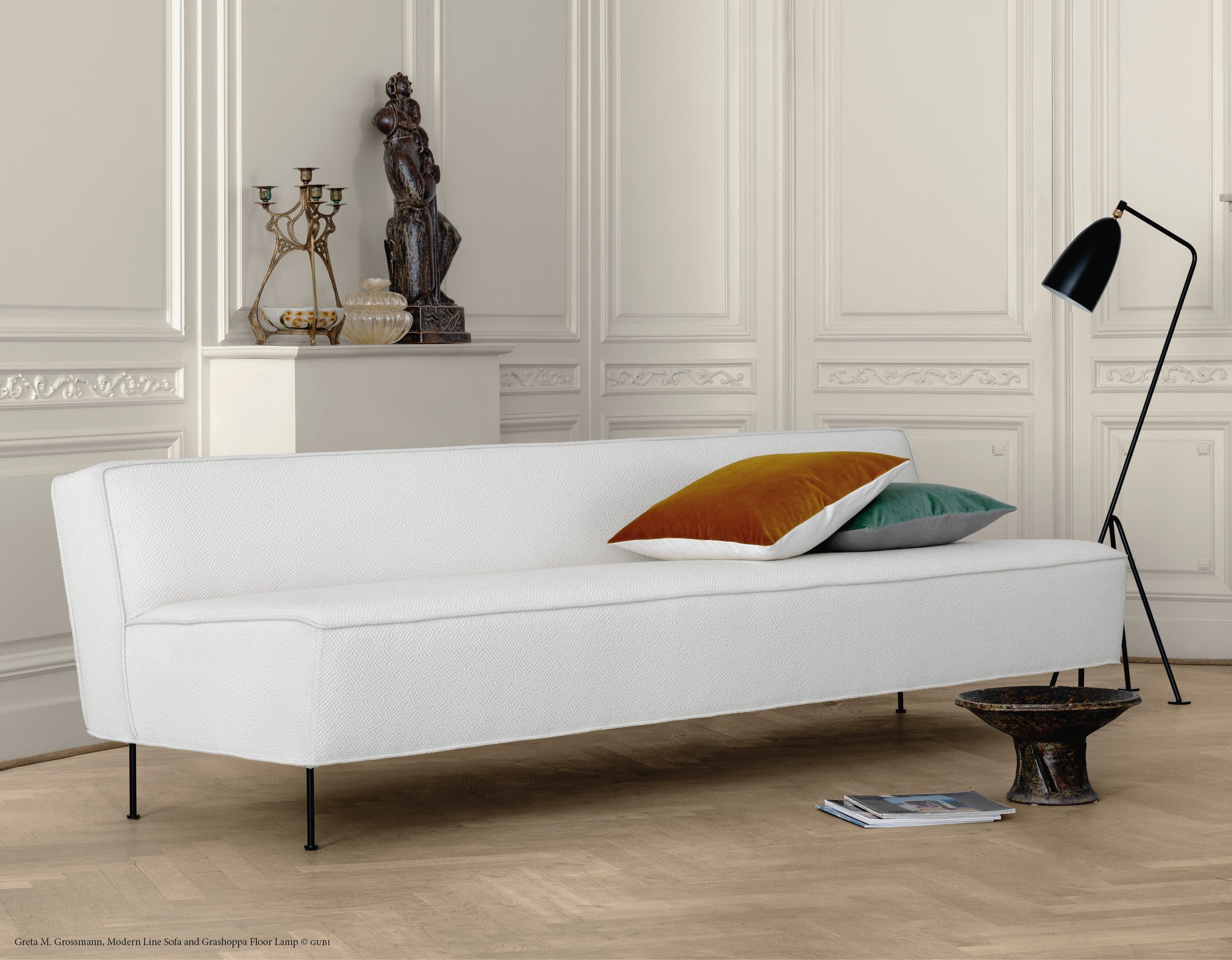 She could count Greta Garbo and Ingrid Bergman among her clients.

Grossman spent most of her (professional) life in the United States. Together with her husband, British jazz musician Billy Grossman, she moved to Los Angeles in 1940. Together they opened a successful furniture and lighting store on the famous shopping street Rodeo Drive. Mid-century European (Scandinavian) Modernism was a style that also found a steady fan-base in California. Her talents as an architect and interior designer were also eagerly called upon, and she could count Greta Garbo and Ingrid Bergman among her clients. 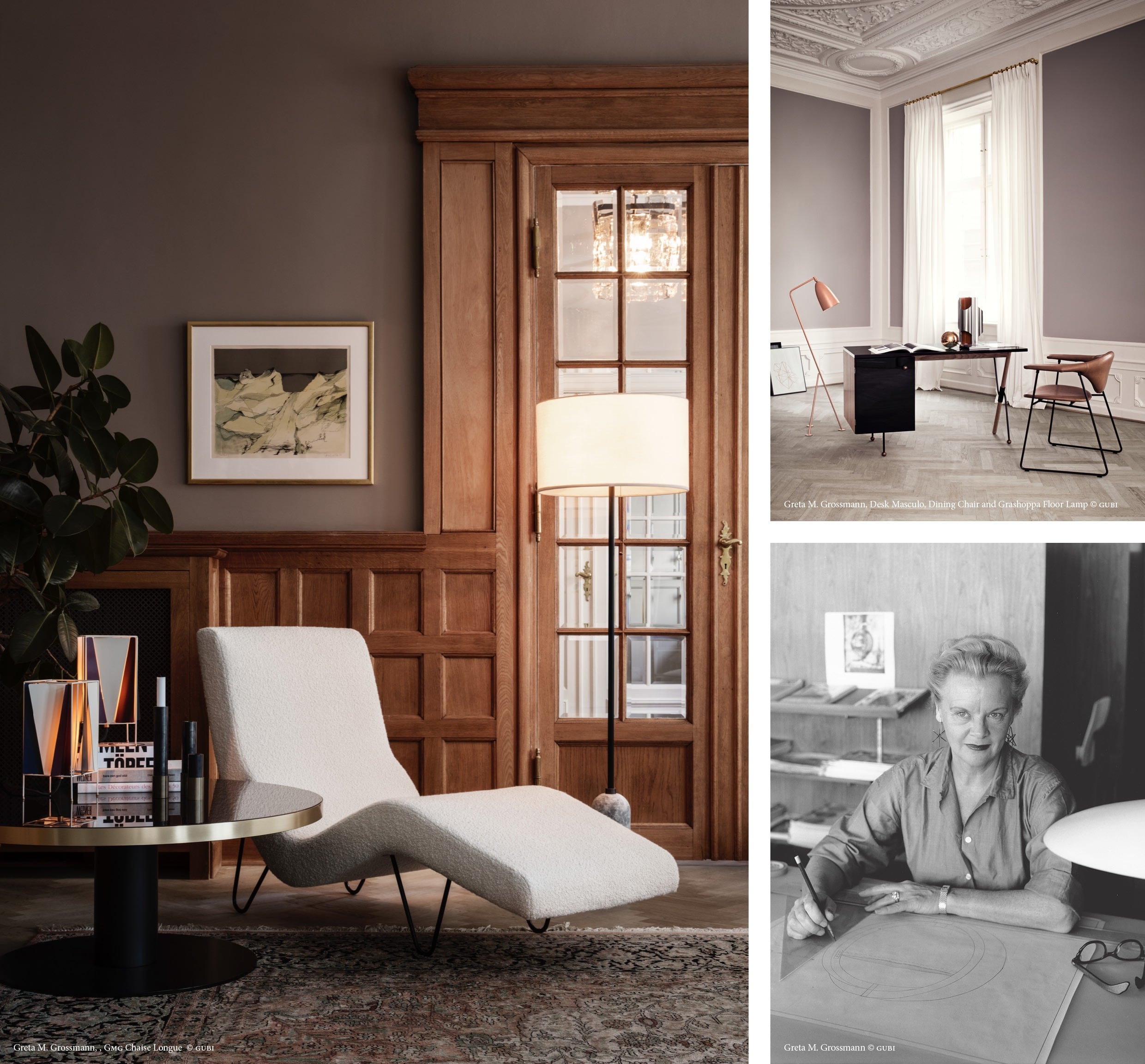 Her furniture design, as well as lighting elements and even architectural designs, are characterised by a certain 'compactness' featuring slender, elegant forms and contrasting materials. They are equally playful and functional, and it is remarkable how after all these years these designs still look fresh and contemporary. Grossman's legacy disappeared from the public stage for a moment, but was picked up by furniture company GUBI, which is now once again releasing icons such as the 'Cobra' lamp series, the '62 Desk' and the 'GMG Chaise Longue’. "I am very happy that we can give this magnificent female designer a second comeback," says Jacob Gubi, founder and CEO of the company.

Read the first part here. Keep an eye on our website and social media for the next part, in which we will discuss the work of Carl-Axel Acking, Yngve Ekström and Hans-Agne Jakobsson. 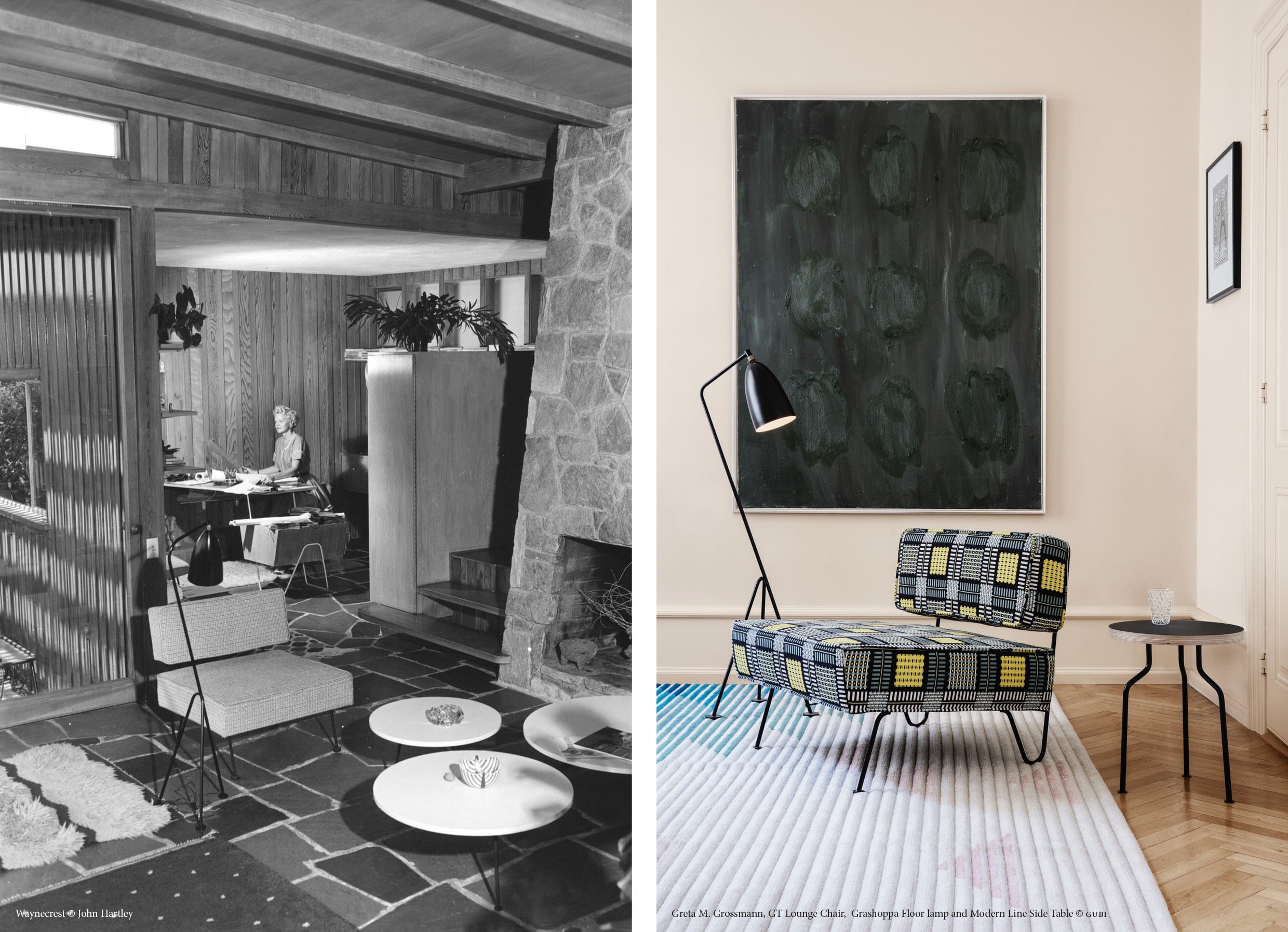